We are delighted today to announce another addition to our stable of Clinical Variation Management clients – Flagler Hospital of St. Augustine, Florida. As we have noted in earlier posts, our clients for CVM span both provider and payer. What makes Flagler so special, however, is Flagler’s size. They are not on the order of Intermountain, Mercy, Mayo or Mt. Sinai – rather they are community hospital with 335 beds and not a single data scientist.

They are, however, innovative.

A 2018 winner of Best Hospitals by Healthgrades, Flagler has has also earned the Gold Seal of Approval™ from the Joint Commission for primary stroke care centers, national accreditation for its total hip and total knee replacement programs, accreditation from the American College of Surgeons’ Commission on Cancer, Center of Excellence designation for its bariatric surgery center, and ANCC magnet status for nursing excellence.

What they do have, however, is a keen appreciation the concepts inherent in value based care. For several years now, Flagler had quietly pursued an value based care agenda, supported enthusiastically by their board.  The hospital had held organization-wide workshops on the subject. Indeed, one of the pillars of their Mind, Body + Spirit program was the economic health of their patients.

Value Based Care has many dimensions, however, one of the key ones is managing clinical variation. Waste, a key component of clinical variation accounts for roughly 30% of healthcare dollars. That is more than $750 billion per year for the US healthcare system and tens of millions of dollars for a community hospital. The problem space of value based care, is so dimensional, however, that is continues to persist, even grow, in the face of countless initiatives, governmental incentives and penalties.

All care is a defined by events. The sheer volume of events associated with any procedure (a lab, a drug, a puncture, rehab, office visits) is immense and with the advent of EMRs we capture everything.

Next is the sequence of those events. What is the optimal order of events and how do we manage the transition of those events where most errors occur.

Then there is the timing of the sequence of the events. When should the order of the events occur? Long wait times for diagnostic tests and slow follow up of test results can lead to delayed diagnosis or even disease progression.

Once you have solved that immensely complex problem – you need to solve the challenge of institutional inertia and resistance to change. Machines are partners for doctors, not replacements – but they need to be integrated into the workflow in a way that delivers against that goal.

Finally, we have to manage adherence. Systematically created, timely and detailed reporting to physicians, nurses and pharmacists makes it possible to understand one’s performance compared to peers and change practice to help remove unwanted variation in the delivery of care.

This multi-dimensional problem demands AI. The inherent challenge for Flagler was that they did not have any dedicated data science resources. What they did have was a strong data foundation and outstanding SQL capabilities. Further, they understood their AllScripts implementation deeply.

Flagler had read about Ayasdi’s Clinical Variation Management application in an informatics journal and wanted to test it against their care process model for pneumonia. Their goals were simple:

This is evidence-based medicine at its best – in service of their patients and comprehensive in its perspective.

Flagler chose pneumonia because of its wide variation in practice created an area where the hospital felt it was falling short. Flagler’s data set included 1,573 patients who were discharged with pneumonia as the principal diagnosis. The data went back to 2014.

Flagler pulled data from five different systems using SQL (EMR, Surgical, Analytics, EDW, Financials). It took 2,000 lines of SQL and three rounds of semantic and syntactic validations to get it right (this was the bulk of the 8.5 weeks taken for the first carepath – the second took only two weeks). They loaded it into Ayasdi’s CVM application using the Fast Hospital Interoperability Resource (FHIR). The Ayasdi instance ran on AWS. 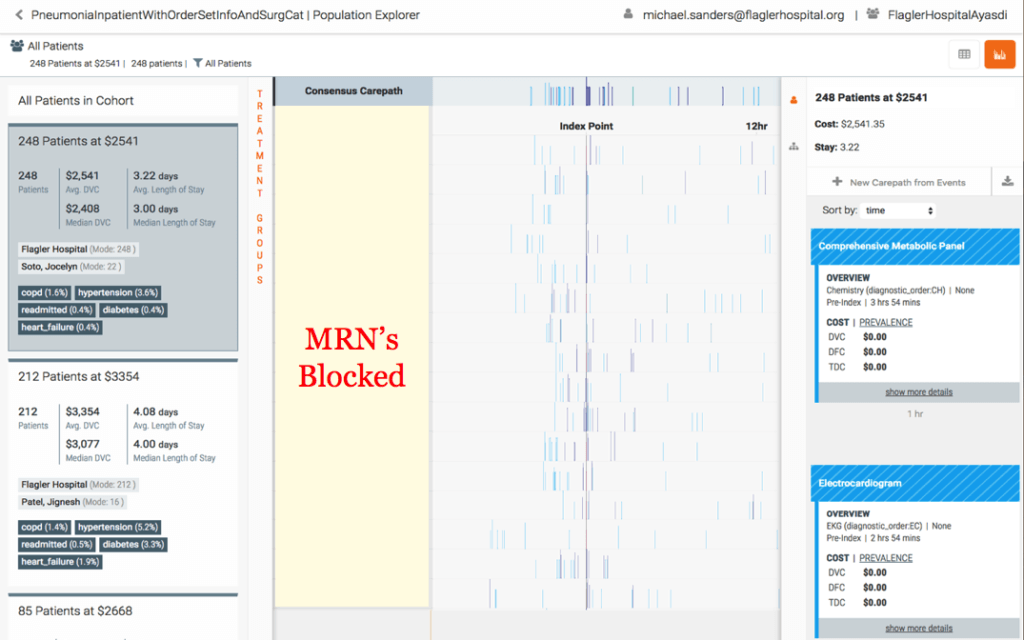 From here, Flagler identified the continuous and categorical variables that distinguished the care pathway groups (again, comprised of patients) and in particular, the “goldilocks” group. This “goldilocks” cohort had remarkable characteristics – if the events, sequence and timing of the suggested care pathway were followed patients enjoyed superior care:

Given Flagler’s admission rate for pneumonia, this represented a potential savings of more than $850K while delivering better care – the foundation of value based care.

The next step for Flagler was to review the findings with the Physician IT Group (called the PIT Crew) and to make the necessary changes to AllScripts. Physician buy-in is critical, as Adherence is a core module of Ayasdi’s Clinical Variation Management system and the ability to measure performance going forward creates data-driven conversations.

There are two interesting anecdotes from this process that bear repeating.  The first is that once doctors became aware of the work that was being done, requests for membership in the PIT Crew skyrocketed and attendance at the bi-weekly meetings doubled. Doctors want access to data.

The second is that one of the more accomplished physicians remarked that the care process model for pneumonia was far lighter than what he would have used, but upon looking at the outcomes, readily agreed that it delivered the same or better care in almost every case – and that what he was doing was essentially unnecessary, or wasteful. Presented with the evidence, he committed himself to rethinking his approach. 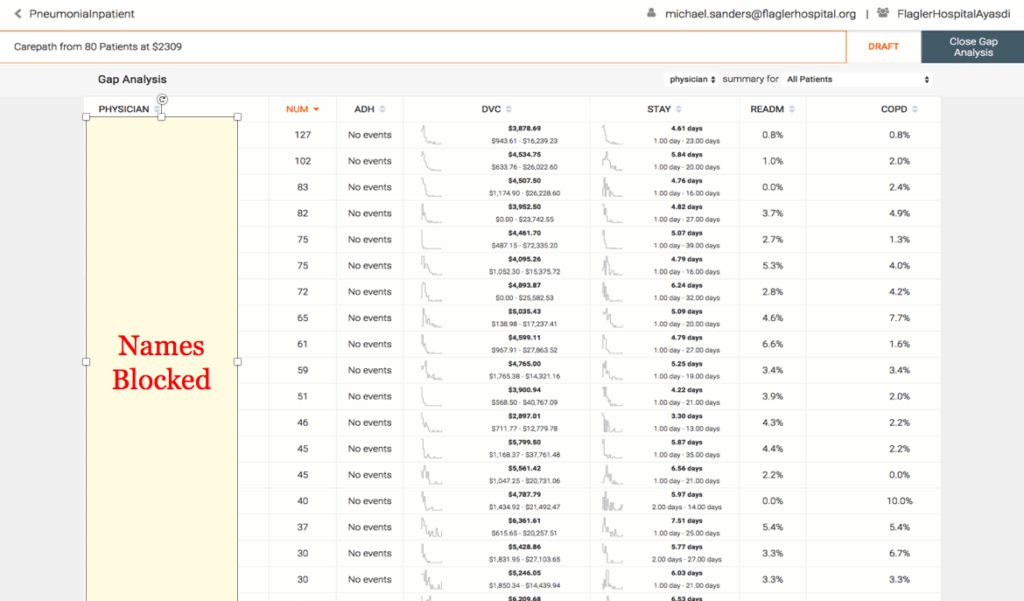 That was it. In the span of just 8.5 weeks, Flagler had harnessed the power of AI to reshape their business without hiring a single data scientist.

More importantly, Flagler has already completed its sepsis care pathway revision and has, based on the ease of use of Ayasdi’s Clinical Variation Management application, increased its expected care pathways production over the next year by 50% from eight to twelve covering everything from heart-surgery to childbirth.

This will have a material effect on the bottom line for Flagler – represented tens of millions in potential savings over a three year period while delivering better outcomes for their patient populations.

More importantly, it serves as a template for other small and community hospitals with the ambition and drive to adopt AI, but without dedicated resources. Indeed, the size and centrality of these community hospitals lend themselves to operationalizing AI faster. There is less politics, better communication and fewer competing initiatives.

The press often bemoans AI’s failures in healthcare, but it is the small wins that matter and those are piling up at places like Flagler. This is how AI is impacting healthcare and patient outcomes. What is different is that Flagler just proved that AI can succeed everywhere – not just the giants.

If you have the ambition to deploy AI in service of value-based care (or have a risk sharing contract that demands you get better at managing variation) reach out to us and we can talk about our approach.