Upgrade Capital held its Data Demo Day on April 28th, 2016 to present outstanding examples of quantitative research completed by students to select buy-side professionals. This year, four students were chosen out of over 1,300 participants in the Code in Finance program. Aldo Eysaman from Boston College was invited to present a series of projects he completed using Ayasdi machine intelligence. Aldo initially set out to help investors better understand the current state of financial markets by finding which past states it is most similar to. Such an exercise is very challenging in traditional risk analysis, which tends to rely heavily on dimensionality reduction. With Ayasdi technology, Aldo was able to tie together four decades of macroeconomic and market data into the following compact shape: 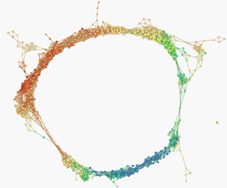 This circular shape was found to represent the economic cycle. To confirm the validity of this interpretation, Aldo identified distinct regimes such as expansion, contraction, and recovery and then confirmed that they generally follow each other in a consistent order. To view further details for this model as well as several others Aldo built, please see Aldo’s slides here.